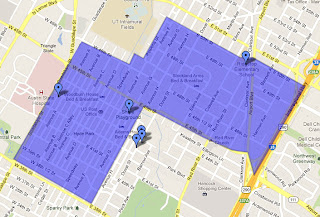 This month, we’re spotlighting the Hyde Park Neighborhood of Austin, Texas.  This week we’ll be exploring some of the dining and entertainment options in this North Central Austin neighborhood.

Asti Trattoria is a popular Italian restaurant located in Hyde Park that has been there so long, it feels like forever.  The delicious, innovative menu features fresh ingredients, gourmet pastas, pizzas, and an extensive wine list served by friendly, helpful wait staff.

Hyde Park Bar and Grill is a Hyde Park Institution that’s been keeping bellies full since 1982.  Instantly recognizable by the giant fork that stands in its parking lot, Hyde Park serves up American food that tastes just like Mama used to make. If Mama was an amazing chef, that is.  Hyde Park is famous for its battered fries, which are some of the most addictive in town.

Mother’s Cafe and Garden is mecca for vegetarians.  Back when Austin was just a meat and potatoes town, Mother’s opened in 1980 for vegetarians, vegans, and any Austinite looking for fresh food done well.  Despite a fire a few years ago, Mother’s is still serving up good food that’s good for you.

For culture, venerable Austin landmark Hyde Park Theatre produces Southwest and world premieres of the best new theatre out there.  They also produce FronteraFest, a five-week city-wide fringe festival that features over 800 local and national artists annually.  Their current production is Slowgirl, about a chatty teenager who visits her Uncle in the Costa Rican jungle.  It features two of Austin’s best actors, Hyde Park’s Artistic Director Ken Webster and Molly Karrasch and runs through April 27th.

If you’re looking for entertainment that’s hilarious and ridiculously cheap, check out Coldtowne Theater.  This Improv and Comedy club has super cheap cover (as cheap as $5 for two acts), and is BYOB.  Pick up a 6-pack of Lone Star and you’ve got an evening out for less than a movie!

Looking for a great apartment in Hyde Park?  Apartment Specialists can help!  We know the specials, vacancies and amenities at the best Hyde Park Apartments.  Give us a call at 512-241-1111 today! 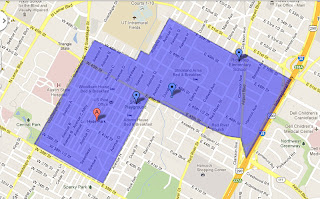 This month we will be spotlighting the Hyde Park Neighborhood of Austin, Texas, considered Austin’s first suburb.  It is located within the boundaries of West 38th Street and West 51st Street to the South and North and Duval Street and Guadalupe Street to the East and West.  Its origins can be traced back to 1891 and it has been listed on the National Historic Register of Places since 1990.

Hyde Park was originally marketed to affluent, prominent Austin citizens.  However, by the early 1900’s, advertisements for the area began to be directed towards “working men and women”.  It called for them to purchase a lot and build a house. Accordingly, modestly-sized bungalows became the order of the day.

Hyde Park is popular for its proximity to downtown Austin and the University of Texas, not to mention how convenient it is to I-35 and Mopac.  It is also beloved by residents for its quiet tree-lined streets, vintage architecture, and parks such as Shipe Park.

Looking for an apartment in Hyde Park?  Apartment Specialists can help!

Posted by Unknown at 3:39 PM No comments:

This month we’re spotlighting the Crestview Neighborhood of Austin, Texas.  This week we’ll be exploring the schools and employers in and near this North Austin neighborhood.

Brentwood is the elementary school, ranked Recognized by the TEA.  The middle school is Lamar, which is a fine arts academy, and the high school is McCallum, which is AISD's Fine Arts Academy.  Students from across the district come to McCallum's magnet program to study music, dance, theatre, and visual arts.

Crestview-area employers include the Pickle Research Campus of the University of Texas.  Located north of Crestview at Braker and Mopac, the campus was originally a Magnesium plant during World War II.  UT purchased the facility in 1949 and it is now home to some of the most advanced research departments on the globe, including Applied Research Laboratories, the Bureau of Economic Geology, the Center for Electromechanics, Texas Advanced Computing Center, and the Nuclear Engineering Teaching Lab.

The Arboretum is also located conveniently to Crestview.  This area of shops and restaurants has many retail employers ranging from Barnes and Noble, a major bookseller, to smaller boutiques like Francesca's Collection, which sells one-of-a-kind dresses and blouses as well as unique jewelry.  Restaurants like The Cheesecake Factory provide opportunities for employment such as waiting tables or hostessing.  Amy's Ice Creams is also in the Arboretum, arguably one of the most fun places to work ever.  Who wouldn’t love serving ice cream like Tom Cruise slung drinks in Cocktail while wearing funny hats?

Looking for a great apartment in Crestview?  Apartment Specialists can help!
Posted by Unknown at 9:49 AM No comments: 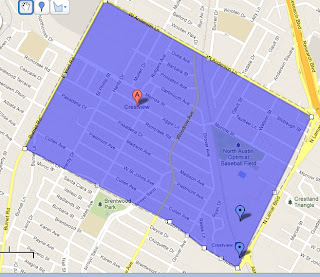 This month we’re spotlighting the Crestview neighborhood of Austin, Texas.  This week we’ll be exploring the apartments in and near this popular North Austin neighborhood.

Argosy at Crestview is an older property built in the 1980’s that has recently been remodeled.  It has hardwoods in some of the units and is within walking distance of not only Crestview Station, but also is very close to major bus lines.

North Village Apartments is an older complex with very affordable rental rates.  They also have the advantage of being a small community.  Some apartments even have yards, which would be great if you have a pet.  Units boast huge living rooms and big porches well and the complex is within walking distance of Genuine Joe’s Coffeehouse and Northcross Mall.

Midtown Commons is the newest complex in the Crestview neighborhood.  It has all luxury amenities you’d expect from new construction including downtown garage style parking and courtyards.  The design is ultra-modern with subway tile backsplashes, island kitchens, track lighting, stainless steel and black appliances and stained concrete floors.  Midtown Commons has retail shopping on the property and is convenient to the metro rail stop.

Interested in an apartment in Crestview?  Apartment Specialists can help!
Posted by Unknown at 2:36 PM No comments: 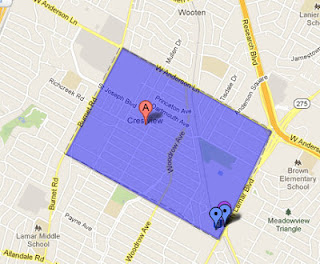 This month, we’re spotlighting the Crestview neighborhood of Austin, Texas.  This week, we’ll be talking about the unique dining and entertainment options available in this great north central neighborhood.

For dining out or getting a few pints with friends, you can't beat Black Star Co-op Pub and Brewery.  Located at Midtown Commons Apartments at Crestview Station, this unique brew pub operates as a cooperative, which means employees are co-owners and are paid a living wage.  So there's no tipping!  Also, patrons can join in the fun and pledge to become co-owners in Black Star.  They have an amazing array of taps from breweries around the world, as well as their own beer which they brew in house.  The food is super tasty as well, check out the burger and their seasoned fries, which in true pub fashion are called chips.

Crestview residents also have the power to get delicious pizza and you don't even have to go to the East Side!  East Side Pies opened a location on Anderson Lane so Northies can get their pizza fix too.  There are even options for vegans and gluten-free pizza lovers!

Looking for something super fun and unique to do with your friends?  At Austin Kareoke you can reserve a private room for you and your friends to belt your hearts out!  It's open until 4am (5am on weekends), and is BYOB.

If comedy is more your speed, Cap City Comedy Club has been making people laugh for 27 years.  From touring comedians to local talent, Cap City is the place to go to laugh until your sides hurt!

If shopping's more your speed, Crestview is just minutes from the eclectic shops on North Loop.  Room Service Vintage is a treasure trove of vintage furniture, lighting, accessories and clothing, all priced to move.

Also on North Loop, MonkeyWrench Books is not only a collectively-owned bookstore, it's a home for meetings, film screenings, workshops, benefits, and performances.  They are proud of their carefully curated selection of radical books and magazines that you won't find anywhere else!
Posted by Unknown at 3:48 PM No comments: