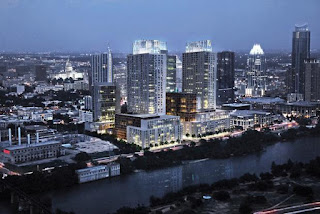 A prime downtown lot, the last large city-owned lot in downtown, was at last sold to a developer after a 16-hour long City Council meeting Thursday that stretched into the wee hours of Friday, The Statesman.com reports

Trammell Crow, the developer, will turn the former site of the Green Water Treatment Plant into a high-rise project with shops, eateries, offices and housing.  The project is expected to cost $500 million and Trammell Crow will pay the city $24.4 million over several years to purchase the lot.

The project is expected to break ground in early 2013, will encompass two towers of at least 30 stories tall and will contain 826 apartments, a 17-story hotel, a 28-story office tower and over 80,000 square feet of retail space.  The project ran into a lot of objections from activists who wanted Trammell Crow to save several large trees on the site, pay workers a "living wage" and make sure enough affordable housing was available on site.

In the end, Trammell Crow agreed to allow safety monitors at least twice a month during construction, to aim to hire at least a fifth of its workforce from local training programs and pay them at least $16 an hour, and to work with Austin's arborist to try and build around some of the big trees.  In addition, they agreed to rent at least 10 percent of the rental housing at amounts affordable to those earning less than 80 percent of Austin's median family income and will keep those rents low for 40 years at its own expense.  The project is expected to bring in $112 million in property taxes to the city over the next 30 years.
Posted by Unknown at 3:26 PM