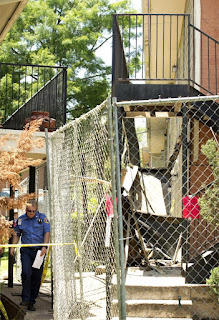 When a walkway collapsed at the Wood Ridge apartments last month, it opened a can of worms of unsafe conditions at the complex.  It also turned out to recall a raid by code inspectors on the same complex fifteen years ago, when conditions were discovered to be even more deplorable.  Statesman.com investigates a problem that appears to never have been solved.
In June 1997, the apartments at 1900 Burton Drive were known as the Hilltop Apartments and were the site of falling down balconies, doors that didn't have working locks, and huge holes in tenants' ceilings from water leaks.  Mold abounded, some residents hadn't had hot water in a year and the gas had been turned off for up to six week stretches.  On top of this, crime was rampant with drug dealers and evidence of drug use in and around the apartments.

After code inspectors and police raided the Hilltop Apartments that time, the California tax attorney who owned the property was given until the end of the year to clean up his property.  By February 1998, the work still had not been done and a week later, the owner filed for bankruptancy in California.  Tenants won a lawsuit in 1998 and each received a $5,000 check.  The property was sold and living conditions seemed to have improved, at least based on the fact that housing advocates received less complaint calls.

The current owners of 1900 Burton Drive have been given 75 days to make the needed repairs, but have asked for an extension to 120 days.  Time will tell whether the infamous address will finally be fixed properly, or whether future residents, many of whom are afraid to speak out because it is so difficult to find affordable housing in central Austin or for fear of deportation, will continue to have to live in deplorable conditions.

An apartment locator knows what complexes are well maintained and which landlords respect their tenants.  Call Apartment Specialists today and let us help you find an apartment you will love to call home.
Posted by Unknown at 9:00 AM