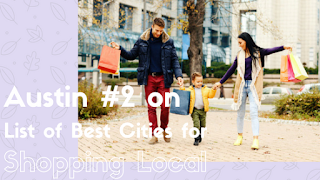 A Yelp ranking has put Austin at number two on a list of the best cities in the US to shop local, the Austin Business Journal reports.

San Diego claimed the top spot and Austin was the only Texas city to crack the top 10.  The closest Texas competitor was Houston, which was ranked twelfth.

Yelp came up with the list by assigning cities a “gifting score”, which was derived by counting how many users put the word “gift” in their reviews for non-chain businesses.

Yelp also found that 64 percent of Americans over the age of 18 have plans to do their holiday shopping locally and have budgeted $324 on average, 26 percent more than 2015.

In another survey, WalletHub found that Austin residents plan to spend $714 on average on holiday shopping this year.

Looking to find a new apartment for your Christmas gift to yourself?  Give Austin Apartment Specialists a call today at 512-241-1111!
Posted by Unknown at 11:46 AM