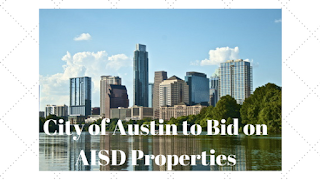 
The affordable housing could help many families in the district and Austin’s 6,000 teachers, who often have trouble finding housing that fits their budget near the schools where they are employed.


Some council members are worried that the city will not have the money to purchase the land if they do win the bid.  City staffers said that the land could be bought with general obligation bonds or money from the Housing Trust Fund.  While the staffers said that they source of the money could be found if the city is the winning bidder, council member Sheri Gallo expressed concern that the agencies that might be asked to provide money were made aware of that.


The specific terms of Austin’s bid were made in closed door sessions and were not available to the public.


Buying the AISD property is part of Austin’s continuing goal of turning public lands into affordable housing for residents with low or modern incomes.


In October, the city council authorized a resolution that told staff to find land that the city owned that could be turned into affordable housing.  Staff was also told last month to work with AISD and Travis County to come up with a process for finding public lands between each entity’s real estate portfolio could be used for agreements that would have the city, county, and school district collaborate on housing, transportation, or space for artists.


Are you looking for an apartment that will fit your budget?  Give Austin Apartment Specialists South Austin a call at 512-912-8000 for help finding your dream home today!
Posted by Unknown at 1:46 PM