Austin's GDP 2nd in the US 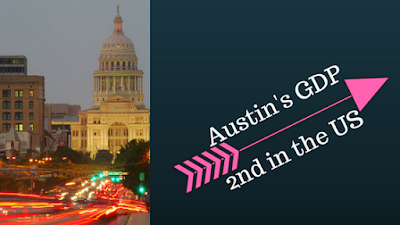 
The San Francisco Bay area beat out Austin in the rankings of metros with a population of at least 2 million.


Austin’s growth was strongest in the professional and business services sector, as well as finance and real estate.  Construction, trade and information were also robust.  The biggest drop in GDP was in the energy and durable-goods manufacturing industries.


Out of the United States’ 382 metropolitan areas, 267 saw an increase in their real GDP.  The average rise was 1.7 percent.


In Texas, GDP in Dallas was up 3 percent in 2016, but Houston’s was down 3 percent due to slowdowns in the energy industry.


Austin may have had the best growth in the country last year, it was the smallest increase in Austin since 2012.  The Austin Metro Area’s growth has been fast since 2011.  GDP was $93.4 billion that year.

Looking to get in on Austin’s strong economy? Austin Apartment Specialists can help!  Give us a call today at 512-241-1111 to find your dream apartment in no time with our free service!
Posted by Unknown at 12:34 PM