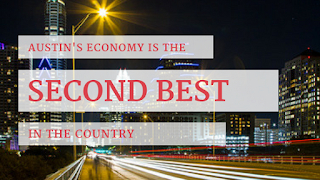 A recent survey found that Austin has the 2nd best economy in the United States, only beat out by Provo, Utah, the Austin Business Journal reports.


Austin had been number one for the past two years.  The cities are ranked using numbers from the U.S. Bureau of Economic Analysis, U.S. Bureau of Labor Statistics, and the U.S. Census Bureau.

Need help finding a new apartment in Austin’s competitive rental market?  Apartment Specialists South Austin can help!  Give us a call today at 512-912-8000!
Posted by Unknown at 7:37 AM