Austin Incomes Up and Poverty Down 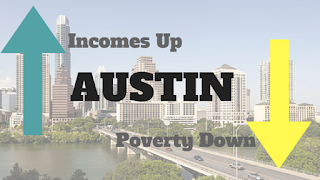 The US Census data shows that incomes are up and poverty is down in Austin and across Central Texas, the Austin American Statesman reports.


While all this increased wealth may seem on the surface to be a success story, and anecdotal stories tell the tale of Austin residents who have been able to make a much better living than they were in the recession of several years ago, Austin city demographer Ryan Robinson cautions that all may not be as it seems.  He theorizes that the rising cost of living in Austin is likely pushing poor and struggling residents out to the suburbs. Non-profits that help the most vulnerable residents in Austin echo his concerns.


There is no way to know for sure from the data whether lower income Austinites are seeing their incomes increase or being pushed out of the city limits by rising rents and home prices.

Whether you find yourself enjoying the rising income rates in Austin, or are looking for affordable apartments,  the expert apartment locators at Austin Apartment Specialists can help.  Give us a call today at 512-241-1111!
Posted by Unknown at 8:47 AM