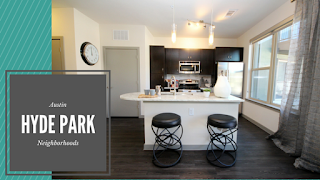 We originally profiled the Austin neighborhood of Hyde Park three and a half years ago.  A lot has changed since then in this charming area considered Austin’s first suburb.
Hyde Park is located north of West 38th Street, south of West 51st Street, west of Duval Street and east of Guadalupe Street.  It was originally marketed to affluent, prominent Austin citizens when it was established in 1891, but by the early 1900’s, advertisements for the area called for “working men and women” to purchase a lot and build a house, resulting in modestly-sized bungalows.  The neighborhood has been listed on the National Historic Register of Places since 1990.


Hyde Park is popular for its proximity to downtown Austin and the University of Texas, not to mention its convenience to I-35 and Mopac.  It is also beloved by residents for its quiet tree-lined streets, vintage architecture, and parks such as Shipe Park.


Looking for an experience that takes you back in time?  Avenue B Grocery has been in Hyde Park since practically the beginning!  Opened in 1909, Avenue B serves up delicious sandwiches and has a selection of groceries so you don’t have to visit a big box to get your pantry staples.


The Parlor has a variety of pizza, by the pie or the slice, an impressive selection of beers on draft, wine, and a full bar.  It's a great place to stop off for dinner and a pint either before or after seeing a play at Hyde Park Theatre, located just across the street.


Hyde Park Theatre is a venerable Austin landmark that produces Southwest and world premieres of the best new theatre out there.  They also produce FronteraFest, a five-week city-wide fringe festival that features over 800 local and national artists annually.


Coldtowne Theater also provides live entertainment in the form of improv and comedy for a super cheap cover (as cheap as $5 for two acts), and is BYOB.  Pick up a 6-pack of Lone Star and you’ve got an evening out for less than a movie!


Residents in Hyde Park are zoned to Austin ISD schools.  Students in Kindergarten through Sixth Grade have attended Lee Elementary since 1939.  It is the only elementary school in the district with an auditorium large enough to fit all its students at one time, and accordingly includes a Fine Arts focus with drama, music and dance performances for all students.


Kealing Middle School is home to a rigorous magnet program in addition to a standard middle school curriculum.  Their mascot is the Hornets and their colors are Crimson and Cream.  Kealing serves nearly 1,200 students in grades 6-8.

McCallum High School is the Fine Arts Magnet for the district.  In addition to regular curriculum, they offer advanced specializations in theatre, music, dance, and art. Their mascot is the Knights.


For both higher education, and employment, The University of Texas at Austin is just south of Hyde Park.  With 50,000 students, UT has a huge impact on the economic and cultural landscape of Austin.


There are many employers in Hyde Park, and because of its convenient location, it’s a quick commute to many others.


Seton Medical Center is located adjacent to Hyde Park and is Austin’s largest medical/acute care center and the only hospital in Central Texas performing heart transplants.  They employ doctors, nurses and administrators in large numbers.


The Texas School for the Blind and Visually Impaired is also located on the edge of Hyde Park.  Students with visual impairments come from across the state to attend this public school. They employ teachers and a variety of staff to run the school.


There are a lot of apartments in and around Hyde Park.  The Triangle Apartments and the Lofts at the Triangle Apartments have stained concrete floors, industrial undertones in the design, and washers and dryers included in all units.  The community has retail shopping on premises, is close to the UT Shuttle, and is very pet friendly.

Ready to make the move to Hyde Park?  Give Austin Apartment Specialists a call today at 512-318-2504 to take advantage of our expert knowledge of the vacancies, rents, and move-in specials at all the best apartments in Hyde Park and beyond!
Posted by Unknown at 12:22 PM