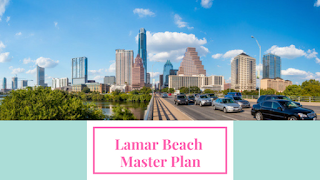 The Lamar Beach Master Plan is moving to the City Council for approval, the Austin Monitor reports.  Haven’t heard of Lamar Beach?  You aren’t alone.


Lamar Beach is located between Lady Bird Lake to the south, TownLake YMCA and railroad tracks to the north, North Lamar to the east and Austin High and Mopac to the west.  It comprises 65.4 acres of parkland and in June 2014 the Austin City Council passed a resolution to begin the Lamar Beach Master Plan.


Austin Animal Center/Austin Pets Alive, YMCA, the West Austin Youth Association, the Texas Rowing Center, and Austin High School all provide public benefits and currently occupy the land.  The number one goal of the project is to balance existing uses on the site with additional recreational opportunities that allow the site to be enjoyed by all to its maximum potential.


There was never a master plan for the site, which has resulted in no cohesive plan for the area.  The new plan recommends several infrastructure and trail improvements, and has an ultimate goal of realigning Cesar Chavez Street.


The plan isn’t a cheap one, with the costs for just phase one forecasted to be $27.4 million to $35.7 million.  The most expensive part of that plan is $18.9 million to $24.6 million for the animal shelter.  The second phase of the plan is projected to be $37.5 million to $51 million, with realigning Cesar Chavez Boulevard the high ticket item at $27.1 million to $37.3 million of that total.  You can read the whole plan here.


However, the commissioners voted ten to zero to send the plan to the City Council, with one commissioner abstaining from the vote because she felt it wrong to spend money on recreational measures when affordability in Austin is such an issue.


The area around Lamar Beach is one of the most vibrant in the city, and the additional improvements and realignment of Cesar Chavez will serve only to make it an even more desirable area.  There are lots of apartments nearby that will allow you to enjoy the Lamar Beach now and when it is remodeled in the future.


404 Rio Grande is three-quarters of a mile from Lamar Beach and has one and two bedroom apartments with upgraded kitchens with granite counters, stainless steel appliances, and pantries, crown molding, linen closets, washer/dryer hook-ups and private patios or balconies.  The community features an elevator, outdoor fireplace, a fitness center, controlled access and more.

Ready to find your new apartment near Lamar Beach or beyond?  Austin Apartment Specialists South Austin can show you every apartment in Austin in one appointment!  Give us a call today at 512-912-8000!
Posted by Unknown at 11:12 AM