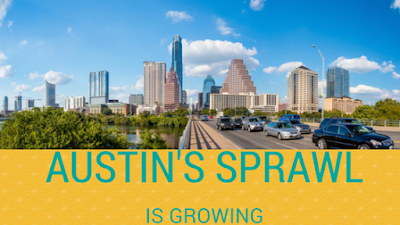 Despite all the talk of making Austin more urban, it turns out Austin’s growth is mostly on the outskirts in the suburbs, according to a new study from the New York Times and reported on by The Austin Business Journal.

Austin’s rate of sprawl was among the highest in the nation and beat out only by San Antonio.  Overall, from 2010-2016, over 80% of the metropolitan areas in the country with one million or more residents have become less dense.

Urbanists have been calling for more housing in the heart of Austin for years, and hoped that CodeNEXT, a rewrite of the land development code in Austin, could have the desired effect.  However, preliminary analysis finds it more difficult to build under the new code than under the old rules.

In general across the nation, the densest metro areas became more dense and the more sprawling ones became even less dense.  The most sprawling metro areas were concentrated in the Sunbelt and included Houston and Oklahoma City right behind Austin and San Antonio.

Looking to get an apartment in the center of the city?  Give Austin Apartment Specialists a call today at 512-241-1111 to find the perfect home anywhere in Austin today!