Is Austin's Boom Time Over? 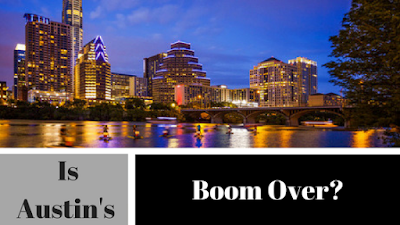 Are the boom times over for Austin?  According to a new article from the Austin Business Journal, they may be.

Despite many articles written recently that Austin was still seeing an influx of new visitors, the Federal Reserve Bank of Dallas’s Austin Economic Indicators report, which was released on January 3rd, found that the city’s economic growth rate has been decelerating for two years.  The metrics they studied are exports from the Austin region and job growth, both of which are down.

The business-cycle index for Austin, which looks at the expansion and contraction of the local economy, has been been getting weaker for the last two years.  Another key metric that on the surface looks great, an unbelievably low unemployment rate, actually means that it’s more difficult for businesses to find new skilled workers and keep them, which might be leading to slower economic growth.

Much of the disconnect between reporting and the facts stems from the fact that many outlets are reporting on data from the past.  That data was collected when Austin was going through an unprecedented period of growth and doesn’t realistically reflect how the economy will act on a regular basis.

Other troubling metrics include the fact that Austin’s 44 months in a row of 4.0% or more job growth every year came to an end last April.  Unfortunately, many Austinites take this insane amount of growth as a given.

Another area of concern:  45 percent of Austinites of working age don’t have postsecondary degrees, and most of those workers are African-American or Hispanic.  Also, IRS data says that 3.9 percent fewer people moved to Travis County in 2014-2015.

It’s not all bad news though.  Austin’s economy continues to grow, even if it is at a slower pace.  Also, a recession is not forecast for 2017, but employment in Texas is only projected to grow at 2 percent.  Texas is also still at the mercy of risks that are inherent in oil prices and trade.

Looking to take advantage of the slight slowdown in the Austin economy to get a great deal on an apartment?  Give Austin Apartment Specialists South a call today at 512-912-8000 to find the perfect new home in no time!