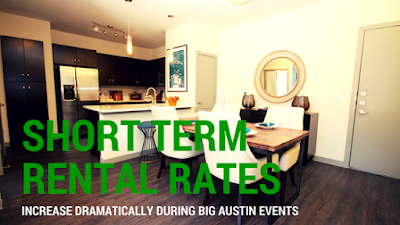 According to Culturemap and a new study from Datafiniti, local events like SXSW, UT graduation, and the Austin City Limits Festival cause costs for Short Term Rentals to increase dramatically.


Using sites like Airbnb, HomeAway, and other short term rental websites, Datafiniti looked at over 10,000 listings from October 2015 to September 2016.


In March 2016 during SXSW, the price for a short term rental in Austin reached its peak: three times more than normal.  Median rent during SXSW 2016 was $600 per night, compared to the normal rate of $200 per night.  Rent for a three bedroom was about $650, but for just one bedroom it was about $100.


Rental rates also rise sharply during May graduation and during Austin City Limits in October, to $400 a night.  Short term rental rates are the lowest during September, November, December and January, with the median rent price less than $200.

Ready to become a long term Austin renter?  Give Austin Apartment Specialists a call today at 512-241-1111 to find your dream apartment in Austin!
Posted by Unknown at 12:11 PM