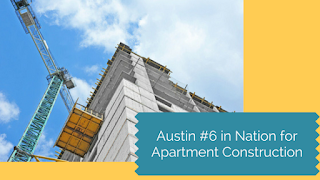 Austin ranks sixth in the nation in new apartment construction according to a report by Rent Cafe, reports Curbed Austin.

Austin will add 13,568 new apartments this year, compared to Houston’s 25,935.  Houston, Dallas-Fort Worth, Austin and San Antonio combine to account for 22% of the increase in inventory for the 50 largest U.S. metro areas.  According to the US Census, those four areas added 412,000 new residents, the most of any state.

The boom in apartment inventory is nationwide, and may lead to lower rents in some areas, but it’s unlikely to help in Austin as the city is already short on inventory.  In June, average rent in Austin was $1,369, while it was $1,213 nationwide.  Occupancy in Austin was 94% and 96% across the country.

What’s driving the apartment construction craze?  A growing number of people are turning to renting, either because home ownership is becoming increasingly unaffordable or to be more flexible.  Nationwide, over 320,000 apartments are projected to hit the market before the end of 2016.

The largest share of apartments being constructed are one bedrooms.  For the US as a whole, one bedroom apartments account for 51% of the new stock.  In Austin, that number is 55%.  32% of new construction in Austin is of two bedrooms, 10% are three bedrooms and just 3% are studio apartments.

How do you find a rental in a tough market like Austin's? Pairing with an experienced apartment locator is a great start. They know up-to-the-minute vacancies, move-in specials, and amenities at the best addresses in town. Give Austin Apartment Specialists a call today at 512-318-2504.