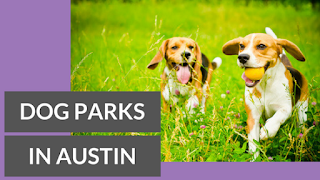 Are you an Austinite and a dog lover?  You’re in good company!  Austinites love our dogs and there are lots of parks and restaurants in town that are dog-friendly.


In South Austin, Norwood Estate Dog Park is conveniently located at the corner of Riverside Drive and I-35.  It has two fenced in areas, one for large dogs and one for smaller ones, as well as water bowls.  Some complaints from dog owners do include that there aren’t many chairs and that there are lots of shrubs for dogs to get lost around.


Red Bud Isle is located on Lady Bird Lake, just below the Lake Austin Dam.  It’s a great place for dogs to let loose and frolic in the water.  There are just twenty parking spaces, which means you may have to wait, but on the plus side, the park doesn’t get very crowded because only a few people and dogs can enjoy it at a time.


The Barton Creek Greenbelt isn’t an off-leash dog park, per se, but is a great place to hike and swim with your dog.  You can also bike on the trails, climb rock walls, and hit the water from a rope swing!
West Austin Neighborhood Park, located in West Austin on 10th street, has a fenced in off-leash dog park, as well as a pool, basketball court, picnic tables, and more.  It has lots of water bowls, toys, mixed terrain and chairs for humans.  There isn’t a separate area for smaller dogs, though.


Auditorium Shores has a leash-free zone for dogs and gets high marks for space, number of water stations, and number of trash cans for dog waste.  However, if your dog is a runner, be warned that the leash-free area isn’t contained by a fence and a dog could easily run out into traffic on busy Riverside Dr.  If your dog likes to swim, Lady Bird Lake makes a great swimming hole.


Sometimes you need food but want to take Fido.  Luckily Austin has a lot of dog friendly patios as well!  Red’s Porch on South Lamar near 71 is a dog friendly bar with food and beer and a spectacular view of the sunset from the patio.


Opal Divine’s Penn Field has a dog friendly deck overlooking South Congress near St. Edward’s University.  They have 36 beers on tap and sixty varieties of scotch.  The food is tasty American fare and there are drinks and food specials almost every night.


Ready to take your dog out on the town in North Austin?  Yard Bar might be the most dog-friendly establishment ever!  There is a large area for dogs to frolic, complete with dogs and “bark rangers” who keep the peace and scoop the poop.  Food and drinks get high marks as well.


If you’re really far north, the Round Rock Dog Depot Dog Park is nearly two acres of puppy heaven!  Featuring a fenced in dog park with agility elements, there’s also a large area for jumping and playing and separate areas for small and large dogs.


Old Stage Park in the Anderson Mill area requires a paid annual membership to use, but has a lot of benefits.  They also have a basketball court, tennis court, and lots of seating and shade.


Are you trying to find a new apartment for you and your pet?  An experienced apartment locator can help you find a great dog-friendly place with amenities for your furry friend like dog parks, nearby trails, and even dog washing stations.   Give Austin Apartment Specialists South Austin a call today at 512-200-7535!