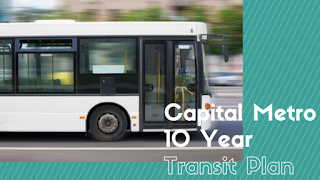 
The plan is a draft at this point and is called Capital Metro Connections 2025.  It was created to address the incredible growth that Austin and Travis County will see in the next 19 years.  By 2035, Austin’s population is expected to grow 20 percent and Travis County’s 30 percent, with the majority of the increase coming in suburban areas that are harder to serve because of their decreased density and sprawl.


In the RapidTransit section, MetroRail’s service would be increased to every 15 minutes.  It also wants to put bus rapid transit service on IH-35 running between Tech Ridge on the north end of town and IH-35 and SH-45 in the south.  The buses would run in special lanes, would never leave the freeway, and passengers would exit via stairs to the local street below.


CapMetro warned that the bus rapid transit service on IH-35 is at least seven years away and depends on whether major changes to IH-35, as proposed by Senator Kirk Watson, become a reality.


CapMetro proposes consolidating MetroRapid and old-fashioned bus routes in certain corridors, which would lead to station spacing changes.  Officials suggest putting stops every third of a mile in those areas.  They also suggest consolidating the premium and base fare system into one fare.


The agency wants to establish a Seventh Street MetroRapid line which would run east-west through downtown.  They want to create a route that will run from Manor in the Northeast, to downtown, to ABIA and be consolidated with Route 20 and the Airport Flyer.


CapMetro is already working on increasing frequency on MetroRapid routes 801 and 803 to every 10 minutes to start in 2017.  The goal is for riders to be able to just show up at a stop and expect a bus to come soon, rather than having to rely on schedules.


Another part of the plan is to make MetroRapid run around the clock, with buses coming every 30 minutes during the late night hours.


Local Frequent routes are the next level after MetroRapid, and the city plans to add to the number of routes that fall into this group, increasing to the total from four to twelve.  There will be a special focus on east-west coverage.


After that comes local service, which has 30 minute intervals along less dense corridors, and will see routes added to Koenig, Anderson, and Braker lanes.


Finally, the plan proposes new circulator buses running through downtown, and for the Domain and Mueller neighborhoods.  If you remember the old ‘Dillo buses, it sounds like they may be coming back (probably without the cute trolley design, though).


The next steps are putting the plan before the public for their input, then a final draft will be written in October which will then be presented to the Capital Metro board again.


Public transit is a great way to get around, and the first step to making sure it works for you is to pick an apartment near public transit.  Argosy at Crestview is a fantastic choice if you want to be near public transportation.  Located in the Crestview Neighborhood, Argosy is within walking distance of Cap Metro Rail at the Crestview MetroRail station and several major Capital Metro bus lines.  This newly renovated community has a dog park, pet washing station, and 24-hour fitness center.  Their one and two bedroom apartments feature nine foot ceilings, washer and dryer connections, and patios and balconies with storage.


Midtown Commons is another great choice in the Crestview area.  The Crestview Station MetroRail stop is on the community grounds and there are restaurants and stores on the property so you don’t have to travel to get what you need.  This luxury, nearly brand new community features garage parking, ultra-modern design, subway tile backsplashes, island kitchens, track lighting, and stained concrete floors.


No matter what neighborhood of Austin you want to find an apartment in, Austin Apartment Specialists can help you find a home near public transportation.  We also know up-to-the-minute vacancies, rental rates, move-in specials and amenities at all the best apartments in town.  Give us a call today at 512-318-2504 to take advantage of our absolutely free service!